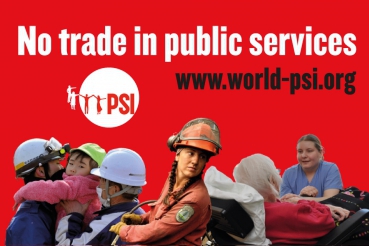 A trade agreement which will effect much of the world's trade is being negotiated in secret in Geneva. The Trade in Services Agreement (TISA) will severely restrict government provision of services. A global day of action against the agreement is scheduled for Monday April 28. At the head of the campaign to fight TISA is Public Services International. The PSI is the global union federation which represents public employee unions at the world level.
Duration: 1'55"
Posted: April 18, 2014